The Need for Different Execution Localities

The software dimension execution locality describes on what processing unit, what type of instructions are running. Rather than defining absolute localities, it defines relative localities.

The Wish for A Single Locality

When leveraging only a single processing unit for your solution - e.g. a single logical core on a CPU - the installation and managing of the software is easy. A single binary would suffice. Also no extra effort to write code for communications and coordination between different processing units are needed. Latency is likely on an all time low for a single request (okay... if we ignore the potential parallel processing of a single request, something that likely makes the code so much more complex that it almost never benefits the solution.).

Running your software on a single processing unit is least complex. Systems with more localities are extremely more complex. The destination service can be unavailable. There is no explicit control over the sources of a service. Coordination between services needs to happen. The latency increases because of extra communication and wait times on dependent services that are already processing another request. And the IT operations of a such a solution is much more complex.

When having multiple localities, most of the time IT Operations is affected by a more complex administration. Therefore a more detailed plan is required for:

The answers to those questions for a single locality are normally simple. There is only a single software package and only one host to install it to.

The Need for Multiple Localities

Though it is clear that multiple localities is not a joy, if not done the drawbacks are the limitations around how performant, reliable or secure the solution is. For enterprise-grade solutions this is often not the right trade-off. Therefore we need to introduce multiple localities to help increase the performance, reliability and the security of the software.

From performance aspect, the following aspects must be considered:

Also the changes of the usage of software in the future must be accommodated. How to handle:

For reliability we must consider the different items that can make the system fail to work. Those risks are normally mitigated by redundancy.

Another aspect is [application] security. There are five scenarios how your application can be at risk:

Be aware of the potential impacts and see what risk level is acceptable. Many times the easy answer is: limiting. Although it is not a complete fix, limiting helps. The less configuration, the less that can be misconfigured. The less users, the less potential malicious users. The less software (including external), the less bugs that are present to be exploited. The less connectivity results in a harder way to introduce malware.

For example: limiting of connections is done by segmenting the network and thus software; limiting the amount of software on a host is done by introducing containers or virtual machines.

We now will look into the aspects of extending the locality of a software solution.

Characteristics: When introducing separate cores, multiple cores and CPUs on the same host can be leveraged. The memory between cores is shared and thus no explicit data transfer is needed between cores.

Drawbacks: Synchronization is needed for two cases: (1) multiple cores can read and update the same memory at the same time without each other knowledges - thus corrupting the state of the software - and, (2) different cores have their own caches and outdated cached values need to be flushed.

Characteristics: Processes are introduced to partition the amount of code that can influence itself. Each process has its own instructions loaded and memory available.

Drawbacks: Explicit communication can be written using shared disk, signaling, explicit shared memory, pipes or sockets. Some resources can only be claimed by a single process (e.g. server ports).

Characteristics: A host is an independent administered unit. It is connected to the computer network.

Benefits: Performance increases beyond the scope of a single machine. Reliability increases as host level outages won't take down the complete system.

Drawbacks: Each host needs to have an unique IP address and hostname configured. Increased stress on the network.

Characteristics: Hosts are grouped together and there is a congestion point between the groups.

Benefits: Security policies can be enforced between at the congestion point.

Drawbacks: Performance is negatively affected by the extra hop.

Benefits: Reliability increases because most outages are mitigated.

Drawbacks: Extra logic is needed for replication of data.

Characteristics: A region has its own regulations. Data and functionality can be controlled per region for conformance with regulations.

Benefits: Improved security by more segregation in data and functionality.

To decide on the execution locality of the software, major trade-offs need to be made. The question is what is the business willing to accept, and what needs to be mitigated by a more complex solution. 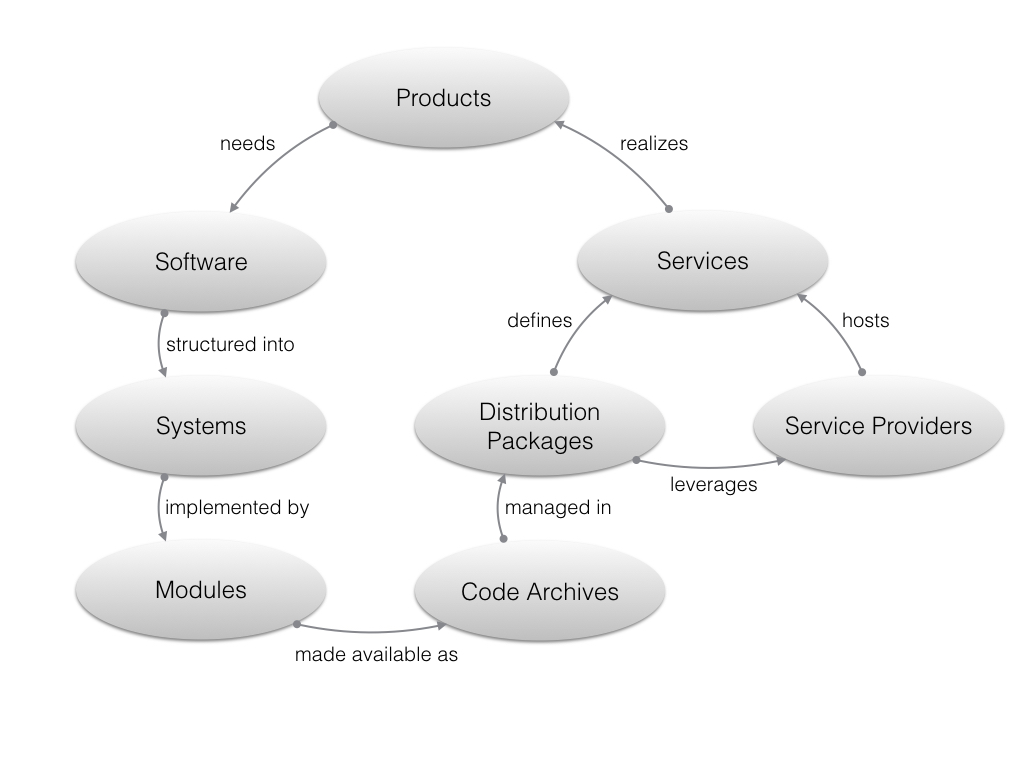 Tangibles in Software Development So far we have described what software decisions and trade-offs need to be made as part of creating a software solution. To make things more tangible, we will now focus on the tangibles involved in realizing a product. Putting the Theory Together We will also link the different topics we have discussed earlier together in this article: solution abstraction levels, code structure, execution localities and implementation technologies. Product The product is defined by business. A product defines the need for software and describes what functionality the software should provide. The product is defined in Business Product and Functional Product abstractions. Software Software represents what technology - read software solution - needs to be developed to provide the functionality of the product. This is described in Conceptual Architecture abstraction. System At next step the software is broken down into systems and systems into components.
Read more